There's so much to learn when learning color reproduction that we’ve decided to offer this short article as one place for newcomers to learn some basics. These are colorful shortcuts to help understand some basic concepts and keep them in memory.

How to estimate L*a*b* colors

We have written about Lab space in previous articles. There are times, when looking at a Lab number, that it would be useful to get an idea of the color it represents just from the digits alone. Fortunately, it’s possible to do this pretty easily. There are 3 axes in Lab: the L* axis represents Lightness or Luminosity from 0 to 100, so that is easy to remember: The higher the L* value, the lighter the color sample is.

But what about the a* and the b* axes?

The b* is best considered by remembering that it moves exactly the opposite from what one would expect. With a letter like B you'd expect the plus values to be more blue and vice versa. But actually this is not the case. In Lab space, minus (-) b values are more toward the bluish range of colors, and positive (+) b values are warmer, more toward the yellow. Just remember that b is the opposite of what you would think, and you should be in good shape. 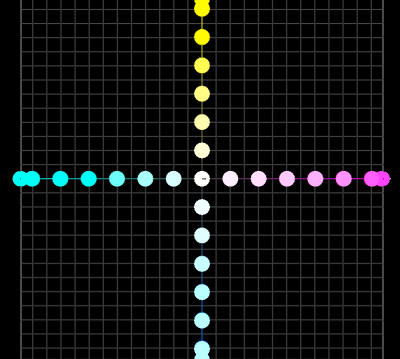 The a axis requires a more colorful memory trick. Negative (-) a moves in the direction of greenish-cyan, while positive (+) a represents reddish-magenta.

Think of the a axis as the "apple" axis. On the negative side we have the green Granny Smith apples, known for their tartness. Not very tasty, thus the negative. At the other end of the spectrum, on the plus side, consider the beautiful "red" Red Delicious apples. Yum! That's a plus in anybody's lunch box. This apple appraisal is even borne out scientifically. An informal poll of color management experts at the CHROMiX headquarters revealed that 100% of the sample group considers Granny Smith apples to be sour and distasteful. There you go.

If you don't share our same sense of apple classification, you can instead think of the a axis as representing our vertical positioning on the planet. Minus (-) is down and plus (+) is up. Green is the color of the land on earth (at least it is with all the weeds in my backyard at the moment). That's down, or minus. But red is the color of the sun, way up high. Plus values move to the reddish end of the spectrum.

Before we leave this topic, please note that while it's easy to fall into calling this the green-red axis, the actual colors on the axis are more of a greenish-cyan to a reddish-magenta. There is a myth concerning this which we wrote about in issue 16 of the ColorNews.

How to explain Rendering Intents

Another challenge to the neophyte in color management is understanding rendering intents. While there are four Rendering Intents when using a profile to print, the two that are most often used are Perceptual, and Relative Colorimetric. To someone who hands you an image and says "I just want it to print correctly," you don't really want to launch into a long explanation describing transforms and lookup tables and Profile Connection Spaces. But you can explain that they have options about what should be done with colors that are outside of a printer's ability to print.

Here are a few analogies I have found useful:

There are different ways to take an object and make it smaller when necessary. For my final project in wood shop in Junior High, I chose to make a bowling ball out of wood. I glued together several different exotic blocks of wood and then turned this big, blocky mess on a lathe to trim off the excess portions until it was round. I basically had a specific gamut in mind and trimmed off everything that was outside of that gamut. This is somewhat analogous to the Relative Colorimetric rendering intent. ( I realize it's an imperfect analogy. To be a true Rel Col RI, all the wood outside would have to be squished and pressed until it were moved to just within the circumference of the bowling ball. But let's not get too technical; come on - work with me here...)

[File:Balloon3.png|right|200px|Okay so it doesn't look much like Mickey Mouse, but it does have ears...] The Perceptual rendering intent is analogous to a balloon. Think of a balloon with a pattern of stars on it. When fully inflated, the stars are in a certain position. If some air leaks out, the balloon gets smaller and each of the stars move closer to the center of the balloon. The relationship between each point on the balloon remains the same, but the gamut of the balloon gets compressed.

If there were a picture of Mickey Mouse on the balloon, the picture would continue to be recognizable as the balloon got smaller, because the relationship between each point on the surface would be retained as each point evenly moved closer together. Not so for the bowling ball. If my original glued blocks bore a resemblance to Mickey Mouse when I started, then much of the original would be cut off as I trimmed it down on the lathe. There go the ears! That's what we'd call "clipping of the gamut."

Naturally, the choice of these rendering intents depends on one's intent for the image. If it is more important that the relationship between all the colors be retained, then Perceptual is the way to go, while understanding that many of the colors will be desaturated. If the greater importance is to maintain the most saturation in the colors, then choose Relative Colorimetric and accept some clipping of the out of gamut colors.

When learning new concepts, it helps to be able to bring to mind concrete visual images. But whatever you do to learn, don't stop learning!

“Education never ends, Watson. It is a series of lessons, with the greatest for the last.”