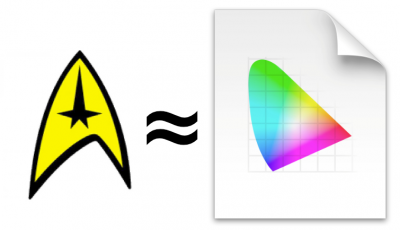 As more of us are connecting to the world through our screens these days, here's a fundamental concept of color management that can be explained with the help of a few YouTube videos. When it comes to handling profiles with images in Photoshop, eventually one gets to the point of needing to assign or convert an image to a profile. The difference between these two is significant, and since many are confused by the standard efforts to explain this, I thought I'd devote this article to a more memorable way to think of these functions.

While isolating at home, I have been recently watching old Star Trek episodes with my kids. I have found some parallels to the world of color management. Here's my attempt to make an odd joining of these two worlds. 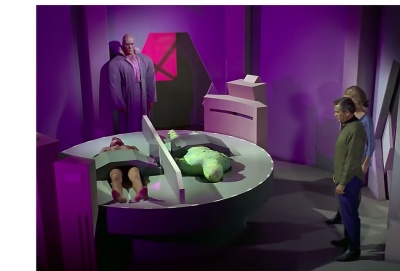 In Photoshop, when you choose Edit > Convert to Profile, you are changing the device values (i.e.: RGB or CMYK numbers) so that the image retains its appearance using new numbers reflective of the new profile. You are changing the numbers so the colors stay the same. Clear as mud?

This is analogous to Roger Korby in "What Are Little Girls Made Of?"

Roger Korby can not only make an android that looks exactly like the human original, by the end of the show, we find that he has done this to himself and gone the full Monty (the full Roger?). He has put his personality, his essence, that which makes him "him" into the android. He has basically been converted into something else. He might look the same and act the same, but the essence of what he is has changed. He's no longer human. Now he's a machine.

When you convert an image in Photoshop, you don't necessarily see any change in the appearance of the image. But it has been re-created with all new numbers appropriate for use with this new profile. This is an all-new image, although it just looks the same. If you are a press operator and your CMYK values have changed because the CMYK image has been re-separated with a new profile, don't expect your CMYK values to be the same as what they were before. It's a brand new image, made a different way. 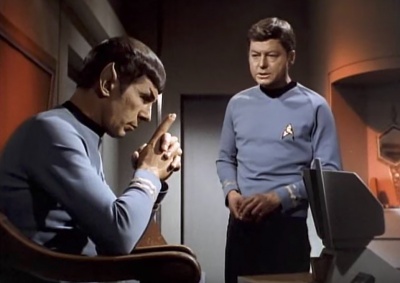 When you choose "Assign Profile...", you are not changing the numbers in the original file. You are attaching a profile to the image that gives a description of which colors should be used in interpreting the RGB or CMYK numbers. There are plenty of occasions when you might want to share an image but not mess with the original. Someone downstream can decide to convert to a profile when it gets printed, for example, but you don't know what profile they optimally should use. Instead, you hand over your image and attach a profile so they know how *you* perceive the color. Assigning a profile is a recommended safe procedure for anyone sharing an image with someone else.

Scenes in Star Trek have likewise depicted situations where people have been "assigned." Recall one of the many episodes where the captain was missing or presumed killed, which resulted in Spock taking over command of the Enterprise (Perhaps the "Tholian Web" or "The Paradise Syndrome.") During the period when Captain Kirk was missing, Spock's body did not change, but he now had a new title: "Acting Captain of the Enterprise". This new title defined what activities he would do, what orders he would give, and how others would respond to him. It was like saying, "See this guy, Spock? Treat him like you would treat the captain." By the end of the episode, when the captain was restored to his place, Spock was able to resume his former role as first officer. He was temporarily re-purposed, but because the original was left intact, he could go back to being the same old Spock.

When we have an image, we assign a profile to help interpret how the colors in the image should be viewed and interpreted. "See this image? Treat it like it is an AdobeRGB image in a nice, big working space."

Just like assigning the captain of a Star ship, assigning profiles should be done properly. Be careful about assigning the wrong profile to an image. AdobeRGB might make an sRGB image more colorful and saturated, but if it does not accurately reflect what the image is truly supposed to look like, it will cause problems eventually. Just remember the time Lt. Riley took over the engine room (in "The Naked Time") and made himself out to be the captain. Sure, it sounds funny to be singing Irish love ballads, but the color in your workflow could go spiraling out of control like the Star Ship Enterprise did!