Curve3 - The Evolution of G7 Calibration

Curve3 - The Evolution of G7 Calibration

In 2006 Don Hutcheson and I began work on our first version of G7 calibration software, IDEALink Curve. Since then the software, and G7, have come a long way. In late 2009 and 2010 we released Curve2, separating the branding from IDEAlliance and updating the software in numerous ways. Besides our continuous improvement to the underlying engine, we introduced a multiple-run document format and radically upgraded the graphing and visualization tools.

For Curve3 we wanted to address user requests, offer improvements for specific printing technologies and also improve the underlying engine and tools so all users would get better results.

Without a doubt, the thing that affects G7 calibration and the output of Curve most is the behavior of the printing device, and to a lesser extent, the behavior of the measurement device. When our users have issues with calibration we usually ask for data and the files we receive are almost always borked in some way (not to put too fine a point on it).

It's a natural thing for the variation and idiosyncrasies of printing processes to appear in their measurements. It's also an interesting struggle to "idealize" the measurements - to reduce the effect of transient problems while trying hard to avoid removing the essence of the process itself. We want to get a good representation of the printing device, but we don't want individual printing blemishes or other defects skewing the overall results. We are usually faced with producing a set of curves from a very small set of data that will be used over months of production. Determining which data to keep, which to throw away and which to bend into conformance, is a critical balancing act.

One area of improvement we've considered is smoothing. There are a number of methods of smoothing printing measurements and the first one we implemented was averaging, built into Curve since version 1.0. Averaging is OK at reducing the effect of errors or outliers occurring on single sheets but it relies on the user printing and measuring multiple sheets - the more the better. In some cases multiple sheets are not available and even when they are its effect is still limited.

Another method of smoothing input and output data is to fit equations to curves. This has limitations as well, and doesn't take into consideration many of the patches you bothered to print and measure.

For Curve3 we set out to apply a smoothing method that was comprehensive. We implemented a multi-dimensional smoothing algorithm that can use all the printed patches if required. The more measured sheets you throw at it the better but it actually does quite a good job with a single sheet. That's still no excuse to not measure multiple sheets. Really.

From a user perspective it's as simple as checking a box to turn smoothing on. We've found it makes an amazing difference on rough, difficult measurements from flexo printing, digital printing and other ill-behaved printing systems. Many instruments struggle with noise in dark colors and this can create significant problems with toning and grey balancing darker colors. Curve3's smoothing makes great strides in damping this noise. 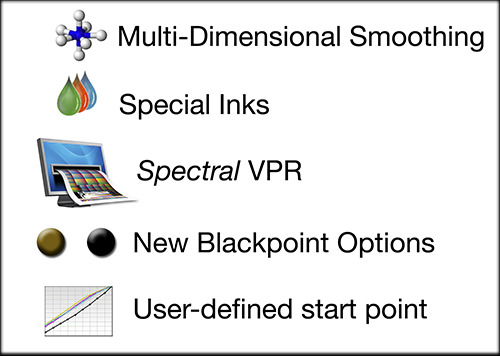 G7 is all about near neutral colors and they are typically made up of Cyan, Yellow, Magenta and Black inks, even if other ink colors are used in the printing process. Due to G7's concentration on CMYK, the toning of additional channels has been left out - until now. Curve3 now has a "Special Ink" mode in addition to the existing G7 and TVI modes.

But how do we calibrate these alternate inks, you may ask?

We can't use standard filtered density or even the popular colorimetric dot gain calculations as the color filters don't line up with the alternate ink colors. Instead we consulted Mark Samworth of ESKO / Artworks who has many years of experience with calibrating packaging systems. His technique is to use the "percent delta-E" method. %DE calculates the delta-E between paper white and the maximum ink value and then linearizes to that value. For example the 50% tint is calibrated to be at 50% of the maximum delta-E value. It's simple, straight-forward, and field tested in hundreds of installs. It's also now part of Curve3.

Curve2's Virtual Press Run (VPR) module has received rave reviews from happy users. By reading in a full IT8 target (or other profiling target if desired) along with your P2P target, VPR curves the IT8's color values, saving you the extra press run. In Curve2 VPR curves the Lab values to simulate the curved press run. In Curve3 VPR curves the full spectral values. Now you have the full complement of measurement information with which to build profiles, determine density values, etc.

Curve2 follows the G7 specification for gray balance aiming. Think of it as a straight line from the measured paper color (or a user specified paper white) down to "absolute black". This works well for a printing system where the 300% CMY patch is dark and somewhere near neutral.

For those printing systems that produce non-neutral CMY patches and don't have much control over the color of that patch (like digital) Curve3 allows the black end of the gray aim to be set to the CMY patch color. There's the possibility that a system calibrated in this manner might fail G7 tolerances. But for those not attempting to be within tolerance, it can create smoother grays with less abrupt transitions as each channel reaches 100%

Until now Curve has held 100% values steady; all curving happens between 0 and 100%. Curve3 allows the option of changing the maximum channel values in order to gray balance the maximum CMY patch. For inkjet systems and anything else that can afford to reduce the gamut slightly, this can greatly simplify gray balance and take care of ink limiting in one step.

Sometimes Curve would let you get away with bad reversals or other data problems. Curve3 is better at providing errors when you need to know your data is outside the range of useable.

If your initial press run was made with non-flat curves either accidentally or due to printing necessity, Curve3 can now accommodate. The initial curves used in your RIP can be entered into Curve for curve calculating. Easy peasy.

We're proud of how far G7 has come and how Curve has helped facilitate its adoption across multiple industries and across the globe. In Curve3 we're confident we've moved things forward and have created an even better tool for anyone striving to achieve G7 with a minimum of expense and effort. Curve3 is expected to ship before the end of 2012 and will be entering beta testing soon.

If you want to be included in an overview webinar, please send us your email address to sales (at) chromix.com and we'll let you know when it's held.