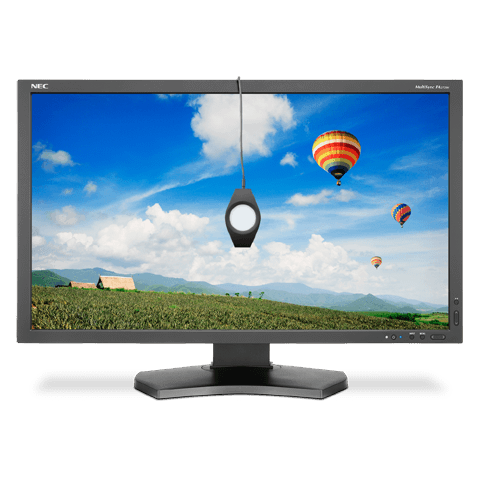 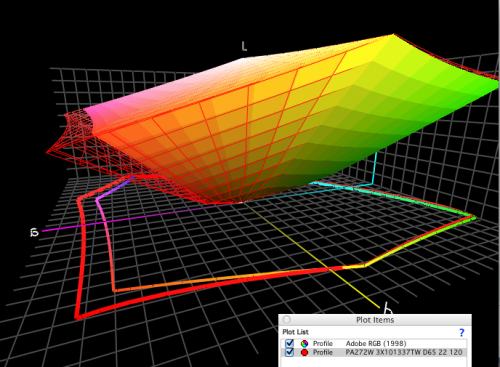 The PA272W, like its siblings the PA242 and the PA302W has a wide color gamut. The use of LED backlighting makes for a slight increase in the color gamut over the previous generation of NEC monitors that used CCFL backlighting. NEC claims that the PA272W produces 99% of the AdobeRGB color spectrum. Our own tests show the 272 has a gamut volume of about 1,310,000 cubit Lab values. This is actually larger than the gamut volume of AdobeRGB (1,207,000) because the NEC covers a larger area than does AdobeRGB. The NEC produces more reds and magentas than AdobeRGB, but AdobeRGB has a very small amount of saturated greens not covered by the NEC.

Because of the new backlighting and the internal color sensors, the PA2 series of displays offers color consistency that we didn’t see before. You can buy several units and expect them to match each other very closely when calibrated. You could even use different PA2 models such as the 242 for storing your pallets and a 302 for viewing your images.

Another thing you want a quality monitor for is consistency of color across the screen. Your cheap monitor off the shelf might produce a lot of color, but those who work professionally with image manipulation need a display that will be as accurate with the color in one corner of the display as it is in the opposite corner. A great way to check this is to fill your screen with a blank white (or off-white) image and see if you can detect irregularities in the color of white on the screen. At CHROMiX, we go a step further and measure the color in 9 quadrants across the screen, comparing the results to each other to see where the largest differences are. A delta E value of less than 1.0 is not visible to the human eye. A delta E of less than 3.0 is considered quite good. NEC corrects uniformity problems with a feature called Digital Uniformity Compensation. The PA272 we tested came out less than 3 for all colors, in all sections of the screen. This issue of uniformity is quite important since a monitor that is not uniform will only get worse as it ages.

The PA2 series of displays can also be calibrated using the basICColor Display calibration software. This is one of the few 3rd party software products that will also talk with the internal graphics of the display and make a quality calibration and profile.

It goes without saying that this series has all the regular features we have not mentioned so far: Wide angle viewing, 14-bit internal graphics card to handle the color calibration, and an adjustable stand that can swivel up to a portrait orientation.

These new LED’s have less power consumption. The PA272W uses 37% less power than its predecessor. LED’s tend to get physically hot, and in order to cool these displays have thicker cases than normal in order to allow for more air flow through the case. This works very well, and the displays are not warm to the touch, and NEC has wisely decided against using fans to cool the displays. The passive air flow works in both the horizontal and vertical orientation. Naturally the display case is a bit chunkier in order to accomplish this internal cooling. The PA272W is about 3.2 inches thick. The 302 cabinet is actually a little thinner and lighter than the 272.

You can now reset the calibration reference numbers from the NEC factory with those from your own instrument.