With the PA322, NEC enters the world of 4K displays with the quality that will not only satisfy the professional photographer - the 4K capability brings the same wide color gamut, uniformity and longevity to the videographer also. This is a big monitor, with a big color gamut, and all the features you need for professional color work. 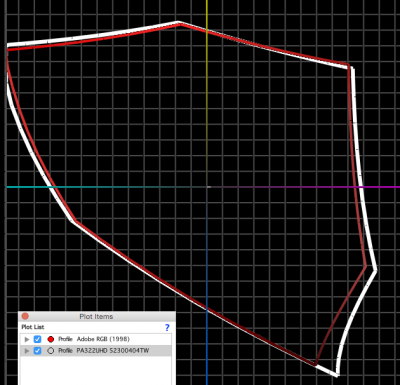 The 322 has a wide color gamut, capable of reproducing all the colors of the AdobeRGB working space. The NEC literature claims 99.2% coverage of the AdobeRGB gamut and my rough visual estimate would confirm that. It almost fully encompasses AdobeRGB, and the small section of the orange gamut that pokes out is inconsequential. A rough estimate of the gamut volume of this display is about 1,280,000 cubic Lab values (Using ColorThink Pro.)

The uniformity across the screen was very good. The average dE between various locations on the screen was about .77. The worst uniformity issue I found on my demo unit was between the upper left corner and the lower right corner. There, the very worst single color difference was a very light gray at 2.91 dE (2000). If that's the worst it gets, then it's still really very uniform. Numbers like this means that the display has very even color across the screen. Most differences are less than the human eye can detect and the worst is barely seen by the human eye. The NEC uniformity is corrected for at the factory using a technology they call ColorComp, and Digital Uniformity Correction. What is unknown is the question of how well the uniformity holds up over time. NEC has a four-year warranty.

Visually the screen on the demo unit we tested looks uniform, except for 2 tiny areas. There are some very slight irregularities in the smoothness of the display: One small dot in the upper left corner, and another near the bottom of the screen, center, a collection of dots. You have to learn to expect a few dead pixels on any display, even something as nice as this. But these don’t seem to be dead pixels since they are out of focus and only show up with the lighter colors. These are also small enough to not cause problems for most users, but I point them out just the same. These are most likely irregularities in the demo unit we were looking at. I would not expect this to be visible in other units.

At maximum brightness the display was able to hit 324 cd/m2. I ran it at 60 cd/m2 without seeing any problems with shadow detail, banding, etc.

The official specs from NEC list viewing angles of 178ø, vertical and horizontal. The larger a screen gets, the more important this viewing angle gets to be in your normal use of a monitor. This screen is so big that as you sit and look at different corners of the display, you're actually looking at the corners at widely different viewing angles. Keeping your perception consistent at all sections of the screen is critical. This is a feature that sets these professional-level monitors apart from the department store variety.