Why and How of G7 Calibration

The Why and How of G7 Calibration

We gray balance cameras, we gray balance monitors, and we gray balance images. Our own human vision is very sensitive to subtle changes in grays. If gray balance is so important in every other stage of imaging, and in color perception, it should be one of the most important things to aim for, and monitor, on press. To put it simply, G7 is a method for press-friendly printing curves that are gray balanced.

There is one massive side benefit of using this technique - press to press consistency. It turns out that gray balance and consistent tone curving is so important to image perception that a print job separated for one printing condition (say SWOP) will look VERY SIMILAR when printed using a different printing system (such as sheet fed GRACoL) when both presses have been gray balanced and toned using G7. This is huge. I cannot tell you how many times I've heard printers say that profiles and color management can't help them with one of their everyday problems - that of CMYK being created before the paper, press, and even printing company has been chosen. A great reason for calibrating to G7 is to get your different presses looking as similar as possible so that you can survive the last minute decisions your clients continue to throw at you.

Sounds good so far? Here’s a quick overview of what is involved with implementing G7.

First of all, you want your press to be in good working order, in control and stable. G7 calibration is not fingerprinting but it is a snapshot of your press and you always want to look your best for snapshots right?

Laying out a press form is an exercise in frustration sometimes. Everyone in your organization wants something different on the page. The good folks at IDEAlliance have put together several forms that include the P2P and IT8-7/4 targets as well as some ISO images. Unfortunately, most of the items on the page (except the P2P) are useless from the first press run. The first run is typically performed with “flat” curves so images look odd and the IT8 can’t be used for profiles because the press isn’t in a condition you want to proof or separate for. (in reality this doesn’t have to be true, read on for more information)

Choose the “P2P” calibration target that is designed for your measurement instrument. This is a 300 patch target which contains some basic CMYK and RGB ramps, and has a specific assortment of near-neutrals. If you lay out your own form, position the targets one after the other (relative to press feed direction) and rotated 180 degrees from each other. It’s next to impossible to imitate the ink use of “normal” press jobs but you can at least try to even things out, and the rotated targets can be used to average data in case the press prints unevenly. For profiling the printer, also include a profiling target such as IT8-7/4. Again, read on for a technique that only requires one target and saves space.

Typical IT8 target in "visual" format

Your inks and paper are important as well. Multiple paper types can be sent through the first run so select a good representative paper for each paper type on which you regularly print. For inks, work with your ink supplier to obtain ISO standard colors (see 12647-2) and spend some time working on press setup, chemistry and ink tack so your RGB overprints are as close as possible to the color reference you’ve selected as your aim point (GRACoL, SWOP, etc). Note that G7 calibration does not affect the 100% value of any channel, so 200% and 300% are out of its control as well. An application like Curve2 will allow you to import any set of measurements for a quick check of solids, overprints, paper color and other patches to see if you are in the neighborhood of your color aims.

All that remains is to create plates with flat curves for your first run. Calibrating your plate setter is wise at this stage so you have something you can return to in the future. Recalibrate your plate setter regularly but not too often. The errors introduced in plate recalibration can be worse than drift. If you’re not sure how often to recalibrate, measure them regularly and track the behavior over time. When you start to see it drift in a certain direction (rather than bouncing around), then recalibration is warranted.

For the first run, get your press up to color (solids & overprints) and then run a stack of each paper type. When you change paper types, bring your press back up to color for your color aim. Other than hitting solids and overprints there’s not much else you need to do.... OK, that’s an understatement, but it’s also outside the scope of this article. We’re not going to tell you how to print, that’s your business.

After printing, allow time for dryback, so the inks can fully cure before measuring. Choose sheets from near the beginning, the middle and near the end of the run for measuring. Accuracy and smoothness of the resulting calibration curves is usually proportional to the number of samples used. The idea is to get a proper cross section of the behavior of the press. Reject any targets that have printing defects in them. Number the sheets so you can know where in the run each target came from.

Measure the P2P targets. If performing VPR (Virtual Press Run), measure the IT8 targets as well. Once the targets have been measured, you can either average them in a program like MeasureTool, or bring them into the software for averaging. Curve2 will color-code each measurement according to how much it differs from the average of all the files in the list. This makes it easier to discard the outliers - samples that are far out compared to the rest. 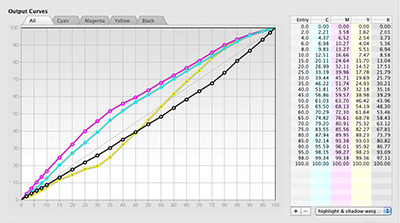 Load the measurement files into Curve2 and it will calculate your RIP curves automatically. If, for some reason, you feel that the measured white point of your paper is not correct (instruments may be fooled by paper whiteners, etc), it can be overridden. It is possible to add or subtract points in the curves to either match the specific requirements of a RIP (Some RIPs have hard coded control points) - or to fine-tune the curves, adding points precisely where an irregularity occurs. Try to strike a balance between the amount of control required to create the tone curves & gray balance that G7 demands - and the smoothness your imagery requires. Curve2 can show you the full-resolution curve it has calculated to aid you in selecting optimal control points. Other applications may have this ability as well.

The software produces a list of CMYK percentage values that can be exported as a text file or printed directly. You then enter these values into the calibration tables (the curves) in your RIP or software drivers. Some RIPs do not have provisions for “wanted” curve input. For these RIPs you can calculate “measured” curves which invert the curve calculations to fool the RIP into producing the desired curve corrections.

If you want, you can do a second press run dedicated to checking the quality of calibration and to generating IT8 targets for profiling. To save time and money you can skip the verification run and use color bar readings from a production run to verify your results. Either way, apps like Curve2 can import a variety of target types to verify G7 tone and gray balance.

Make sure you run to the same target densities & color values as your initial run. I can’t tell you how many times we’ve had tech support calls with IDEALink Curve or Curve2 where the underlying problem was that the second run had significantly different solid color values from the first.

If you calculate the delta-a/b value (the “horizontal” distance between the a & b values of two points in L*a*b) you have a good number for measuring the gray balance of a gray scale. The name delta-F* has been chosen to represent this gray-balance indicator as it is simple, memorable, and unique in the world of color. Curve2 calculates both the L* match to the idealized G7 curve as well as the delta-F* value.

As mentioned above, a second press run using your new G7 curves will provide you with color targets for making ICC profiles of your press. Curve2.1 has a new function which simulates the second press run. VPR (Virtual Press Run) applies the calculated curves to a profiling target like the IT8 that was printed in the first run. Measurement data is returned that behaves as if the second run had been performed and measured. The benefits are numerous: obviously the cost of a second run is avoided, and the variation between runs is also removed - something which is significant in flexo and other less-repeatable printing methods.

To save on space, time and reduce error we’ve created new, hybrid targets that combine the P2P target with IT8 and other profiling targets. Redundant patches have been removed and the resulting target is smaller and easier to place on a variety of printing forms. Combined with VPR, the OneRun target makes it a simple process to G7-calibrate and create profiling targets for multiple papers from one single press run. Curve2.1 will extract the individual targets from the OneRun target using the P2P patches for curve calculation and the IT8 patches for VPR curving. Other OneRun targets incorporating alternate profiling targets will also be available.

IDEAlliance supplies a "How To" kit which tells you everything you need to know to implement G7. It's even free. This is written from a scientific, proof-of-concept point of view, rather than a practical, I-have-a-business-to-run point of view. For example, you chart your Neutral Print Density Curves by hand on FanGraph paper in order to come up with the output values. If this is the first time you are attempting this, the FanGraph method can take a lot of time. Using a software method has several advantages:

G7 is proven and effective

Use G7 to help hit GRACoL and SWOP color BUT remember, G7 is great for more than trying to hit industry standards. The gray balance and toning that G7 provides makes for more stable printing and better ICC profiles on ANY printing system. Having all your print systems calibrated to the same set of visually neutral aims helps your entire plant to have consistent color, from device to device.