Myth #11: Printing a profiling target is a good way to evaluate a profile

I cannot tell you how many times we see this happen. It sounds simple enough, really. Print a profiling target to your printer with all color management turned off. Send the target off to CHROMiX to have a profile built for you or build one yourself using your own equipment. To test the profile, reopen the original profiling target in Photoshop and print it through the profile.

Anyone see the flaw, or flaws in this approach? 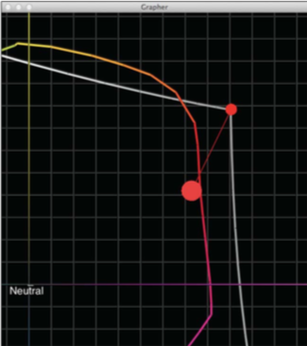 It sounds like it should work but there is a subtle yet very important function occurring that renders the printed result useless for testing anything but grays. When you print your profiling target originally, no color management is to occur to the pixels in the target. So a 255,0,0 RGB Red will print the PRINTER'S VERSION of 255,0,0 Red. No problem. When you look at the print, the colors seem saturated & pure and seem like they'll build a good profile. (They typically do).

When you reprint the target through the profile, Photoshop has to assume a source color space for the profile. After all, if you are converting TO your new print profile you have to convert FROM something right? (remember, profiles are always applied in pairs) So Photoshop is now assuming that 255,0,0 RGB Red is Adobe RGB red (or whatever you're using as your working space). It is important to note that Adobe RGB's 255,0,0 Red is typically quite a different color than your printer's 255,0,0 Red. That's why you need to build and apply your printer profile in the first place. Adobe RGB 255,0,0 Red sent directly to your printer doesn't look right. (that's why the original profiling target print probably didn't match the target displayed on your monitor).

So when Photoshop converts your 255,0,0 Red from Adobe RGB through your print profile it gets the closest red your printer can supply. This is NOT going to be the same red as the printer's version of 255,0,0 red. To help understand this think of two triangles, one overlaying the other but rotated 15 degrees or so. Your Adobe RGB 255,0,0 is at the tip of one triangle and the printer's 255,0,0 red is at the tip of the other. They're both reddish but definitely not the same - Adobe RGB's red is oranger than the printer's. When Photoshop uses profiles to match, the profile will "move the Adobe RGB red in" toward gray until it hits the first color the printer can print. (think of sliding in toward the center of the Adobe RGB triangle until you hit the edge of the printer's triangle). This will result in a slightly orangy red that is less saturated than Adobe RGB's full 255,0,0 red but fairly hue and lightness-accurate.

Can you see the problem now? You (unknowingly) asked the printer profile for it's closest match to Adobe RGB red. It might have given you a pretty good match but if you are visually comparing to the original printed target's 255,0,0 red you will find they do not match at all! They are not supposed to!

My example of 255,0,0 Red is obviously only one of millions of possible colors, all of which will probably not match! The only exception is the neutral grays. Grays in your working space SHOULD create grays on paper. This can be a pretty good test but the gray patches are often surrounded by colors that throw off your perception and so are hard to judge. If you want to print targets to evaluate grays, use targets which have the grays isolated and be sure to view them under controlled lighting. A final point to this lengthy description is that the human eye does not do well with patch-to-patch comparisons. Our eyes evolved their color discrimination judging good food from bad and sick people from healthy, among other things. Use real-world pictures of people, food and other natural scenes to judge color accuracy.

You will see a subtle magenta shift in dark skin (one of my favorite tests) or a greenish tint in meat way before you will ever see it in color patches of the same colors.

Targets are for computers, pictures are for people.

Most inkjets in use today use more than 4 inks when printing. (I can say this with some confidence as Epson seems to have over 2/3 of the market and all their printers have more than 4 inks).

In most of these printers, Cyan, Magenta, Yellow and Black inks are joined by light-Cyan (Lc) and light-Magenta (Lm). When lighter, highlight colors are printed, the lighter versions of Cyan and Magenta are used (Yellow is light enough to not typically require a lighter version), Black is almost totally shut off and it becomes very difficult to see any dots. This makes the inkjet appear to print at high resolution and can create smooth color transitions.

From a more technical "channel control" perspective, the Cyan and Magenta channels are fairly normally behaved. The hues of the light Cyan and light Magenta inks are closely matched to their darker siblings. Imagine printing a "wedge" from 100% ink to white. As the printer moves from 100% dark ink through the midtones it adds progressively more light ink and removes dark ink. When it moves up into the highlights, the darker ink is removed entirely and only light ink remains until it is removed entirely and you finally reach paper white. This behavior is usually transparent to the user although in some RIPs you can control how and where the transitions occur. Either way, it is transparent enough that the blending occurs independently of any color profiling that may occur.

So, as far as profiling is concerned, these are 4-hue printers and we typically make either CMYK (if a RIP is available) or RGB profiles (for normal driver control). The addition of "light black" (as Epson likes to call it) to some newer printers also does not affect channel control in profiling. Epson has recently introduced a true 6 color printer to their line, adding Red and Blue inks. This printer, along with other true 6-color printers might be profile-able as more-than-cmyk printers but a good RIP that gives full access to all the color channels is still required. For those using manufacturer drivers, RGB is still the type of control we have and the profile that we build.

Myth #13: Look at a print closely to see the color better

OK, so perhaps we don't think about this consciously but we all do it. Grab a print and bring it closer to your face to see the details better.

A little physiology and color history are in order. First, those wonderful color-sensing cones in our eyes are concentrated in an area of your retina called the fovea. Your thumbnail at the end of your arm makes an angle of entry into your eye of about 2 degrees and roughly within your fovea. It makes sense that as you move your thumbnail (or a print sample) closer to your eye, it makes a larger image on your retina and the mix of rods (black and white only) vs cones under that image changes significantly. Does this mean your color perception of it changes as well? Yes in fact, it does.

This "thumbnail" sizing is pretty rough but not a bad visualization. I've done some quick calculations (who said I'd never use trig) and found that I need either shorter arms or fatter thumbs to get 2 degrees but I'm sure you get the idea.

Anyway, color profiling technology today is based on machines attempting to "see" colors as the human eye does. This is achieved in part by using "standard observer" information from the CIE that shows us how the human eye responds to light. There are two main standard observer types: 2 degree and 10 degree. As you might be able to guess, this means we can calculate colors based on the "thumbnail at the end of your arm" size of retinal image or a significantly larger "thumbnail at about 4 inches" size. I've done some color differencing calculations and found that colors can differ by many delta-E in some cases.

So remember that the size of the image in your eye plays a part in color matching. Using a larger lighting booth that requires you to stand a few feet back from your prints is a good idea. Also, if you do large-format work and want to print small samples for proofing, do not print the entire image shrunk down to fit on your proofer's page! Print a chunk of the final work that will fit on your proofer page but not be reduced in magnification. Otherwise you'll be playing optical tricks on yourself that will not result in happy customers.

I don't know about you but the word Brightness to me means, well, brightness. How light or bright something appears to my eye. Related perhaps to how much light it gives off. Contrast (to me) is how much of a difference there is between the light areas of an image and the dark ones.

On CRT monitors however, they don't mean that at all. The Contrast knob controls how brightly white and the lightest colors will appear. It sets the maximum amount of light the screen will produce (also called gain).

The Brightness knob on a CRT controls how light the darkest shadow colors are. Known as bias to engineers, it controls where/when the guns "turn on" to create the first step of gray above black. These are both very important controls when calibrating your monitor but they've always seemed mislabeled to me.

Myth #15: LCD brightness IS brightness which means it's not the same as a CRT

Now that we are moving headlong into the world of flat-panel displays it pays to pay attention to how things work in "LCD land".

What I have found on most non-laptop LCD displays is the disappearance of the Contrast control. The Brightness control is still available and controls the output of the backlight system.

This means that the Brightness control changes the total light output from the display. Yes, this is the job of the Contrast knob on CRT's. So contrast on CRTs becomes brightness on LCDs and brightness is gone!

I'm happy to see that the Brightness control on an LCD has a name that finally makes sense but concerned that this all happened without any notification or explanation. I don't know about you but I didn't get the memo!

I suppose Myths 14 and 15 fall into the "just thought you should know" category.