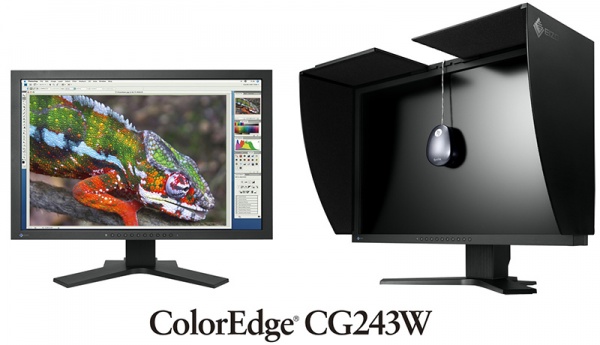 The CG243W is a $2500 display with all the high end features one expects from Eizo. It has a very wide color gamut, encompassing more than the AdobeRGB gamut, it has very good uniformity across the screen on all colors, a top notch IPS panel giving a wide viewing angle, it can handle moving pictures with speed, and it also has a DisplayPort input which is a vital link in the chain of signal processing which makes it possible to view images in higher than 8-bit resolution. It also seems to be setting the bar for desired features on high end displays: It is a wide screen (20 inches wide) which allows for 2 letter-sized sheets to sit side-by-side in your display area, has high-bit internal color processing to reduce banding, and something only Eizo has: a 5 year warranty. 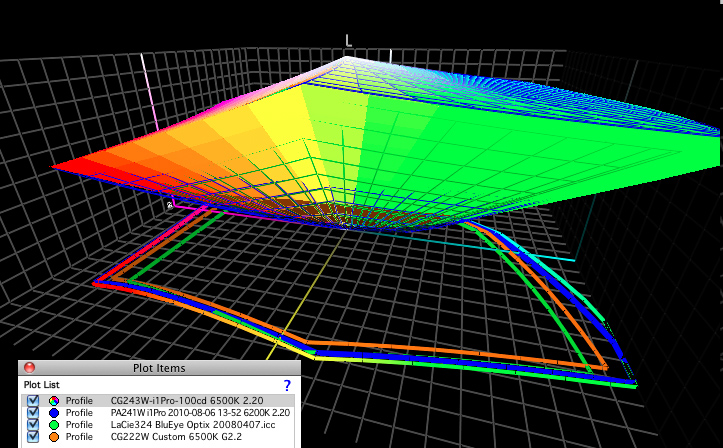 How is this for a starting sentence: Our tests show that this monitor has the largest gamut of any display we have ever tested, bar none. Calibrating the CG243 with a Spyder 3 gives a whopping gamut volume of 1,426,000 cubic Lab values. This is more than what we've seen with earlier Eizo's, with the LaCie 324, with the NEC 241 and 271. If you're looking for a display to capture the most color, this is it. Naturally your actual gamut volume will vary somewhat depending on the software and instrument used for measurements. The Eizo specifications claim 98% of the AdobeRGB gamut, but in my testing - it's basically all there and then some.

In the illustration on the right, the Eizo CG243W is the volume represented by variable colors. The 2D outline of the gamuts shows the 243 on the outer edge of all the gamuts shown. 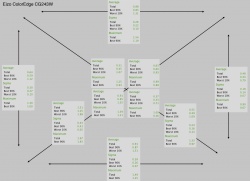 Eizo's advertising claims that their Digital Uniformity Equalizer: "ensures a Delta-E difference of 3 or less across the screen when the monitor leaves the factory."1 The uniformity across the screen is all they claim and more. In our own tests, the average deltaE (de2000) between various locations on the panel are all well under 1.00. The worst uniformity issue I found on my demo unit was between the upper right corner and the lower left corner. There the difference between all the colors averaged around 0.72 - and the very worst difference was 1.97 - a blue/cyan patch that was slightly lighter on the upper right side of the display than on the lower left. As these figures indicate this monitor has very even color across the screen. Most differences are less than the human eye can detect and the worst is barely seen by the human eye. This is the best I have ever seen in my tests of various displays over the years.

Numbers don't tell everything, so we make a visual check of the display using grays and whites on a full screen. Visually this display looks very uniform, as you would expect.

The display is designed to run between 60 and 120 cd/m2. When we calibrated it and ran it at 60 cd/m2, we found no problems with shadow detail, banding etc. In order to run at greater than 120, you are presented with a warning dialog in the ColorNavigator software before you are allowed to extend the brightness range. The brightness tops out at 234 cd/m2 if you want to run it that high (and Eizo does not recommend it.)

The specs report an viewing angle of 178o which seems to be about right. There is no problem being able to see an image uniformly even if your eyes are not directly in front of the display. If viewing extremely off-axis, we will see changes in color and brightness as is expected. Up-and-down variation is a bit more pronounced than the side-by-side variation.

The CG243W has internal 16-bit image processing, or what they call a 16-bit Look-Up Table.

With most displays, the computer's graphics card is called into play to make color adjustments in its own LUT. However the vast majority of these graphics cards are limited to only 8-bits of resolution. That means that the system has only 256 steps in which to define every single shade of color between black and white. When you combine this limitation with the extended gamut saturation of these new wide-gamut monitors, you end up with a good recipe for seeing banding on your display. For this reason, any wide gamut monitor needs to have some kind of high-bit depth processing built into it so that banding can be reduced or eliminated. For more information on this, see the colorwiki article Monitors, Part 1

Beyond the 16-bit internal processing mentioned above, color geeks have long sought the ability to view true 16 bit color resolution from Photoshop clear through to their display. While you can tell Photoshop to manipulate an image in 16-bit, until recently you have not been able to truly see that depth of color resolution in your display. This Eizo CG243W is among the short list of products that are links in the chain that can make this possible. Also needed is an operating system that can handle it, and a computer video card that is compatible. For more information on this, see the following links, or contact tech support at CHROMiX.

ColorNavigator is the Eizo software that is designed specifically for calibrating and profiling their high end displays such as the CG243W. It has all the choices needed for accurate display profiling for a variety of needs. An installation CD is included with the display, or, if you prefer, a free download is available from the Eizo website. Using the latest download is always a good idea since they are regularly updating the software to work with new models, new operating systems or adjust for changes in the industry. If you already have ColorNavigator, you would need to update to version 5.3 (released in November, 2009) or newer to work with the CG243W.

The recent version of ColorNavigator is much easier to use than previous versions. Essentially you create a "target" that contains the settings you want to calibrate to. Then, each time you calibrate you choose that target and proceed with the calibration. Place your calibration device on the face of the monitor when prompted, and the software does all the measuring, calculating and profile-building. Through a protocol called "DDC" (Direct Digital Correction), the software is closely linked with the internal graphics of the display, and ColorNavigator takes care of this whole procedure including contrast, brightness and color calibration. There is very little the user has to do (and therefore, there is little chance of user error!) and this adds to the month-to-month consistency of the display.

ColorEyes Display Pro is a popular third party profiling software that can sometimes be used instead of ColorNavigator. While we have not been able to test this function here, it has been reported that ColorEyes Display Pro can be used to interface with the DDC capabilities of this monitor. So this could be another option for some people. Other than these two software programs, other monitor profiling software should not be used with this Eizo because they would not be able to "talk" to the internal graphics in the display.

Much importance is place on an LCD monitor's ability to reproduce blacks and near blacks well. This is one of the main complaints about LCD displays from those who are used to a CRT. Blocking a back light with liquid crystals is quite effective, but it's not as good as not having that light blasting away to begin with. Different measurement devices have different capabilities in their abilities to measure black. The one we like to use is the X-rite DTP-94 colorimeter. This has a noise-filter circuitry built into it which allows it to measure black more accurately. When looking at black measurement numbers, the lower the number, the better it is. Using a DTP-94 on the 243 calibrated to 100 cd/m2, we measure the black at .21 cd/m2. This is a good, dark, black and is considerably lower than the typical LCD display - which runs around .30.

In viewing a gradient of gray from black to white on the calibrated CG243W, the gray looks very neutral for the most part. I could detect a very small amount of colored banding.

The physical screen rotates easily between vertical and horizontal. There is no "automatic" software image rotation though.

This display raises and lowers about 3.5 inches. It can be positioned from fully upright to laid back about 35 degrees, and pivots about 35 degrees from left to right. (The base stays in one place while the display rotates.) The bottom of the display is about 4 inches off the table when in the fully down position. Our demo unit was using the original stand which shipped with the 2009 models. Newer stands are slightly different.

I am able to easily distinguish highlights of 1 L value difference in Photoshop. Distinguishing shadows of 1 L difference is a little harder, but still visible.