This reserved article originally appeared in CHROMiX ColorNews Issue 61 on May 24th, 2017.

The subject of fake news has been bandied about the news outlets in recent months, and I must confess I feel this issue’s article will be accepted as readily as "Two headed man talks in stereo!"

I don’t know how to say this in a way that will help you believe it, but here goes:

CIELab, or more correctly spelled: CIEL*a*b*, is intended to be a device-independent color-space based on the measurements of 30 some-odd humans, which William David Wright and John Guild did in the late 1920s. the CIE created the CIEXYZ color space in 1931 from these experiments. In 1976 the CIE created the Lab space to reflect the entire gamut or range of colors the human eye can typically see. Lab space, unlike other CIE color spaces, is supposed to be perceptually uniform. That is, any movement within the space, in any direction, should result in an equally perceptible color shift.

We in the color industry have spent years teaching the color-going public to respect, accept, and embrace Lab color space as the connection of choice when it comes to communicating color.

We have gently reminded press operators that those CMYK values are not really colors, but just numbers that give them certain colors on a certain machine with a certain medium. Use Lab values to qualify colors, press operator!

Don’t just hand me a Pantone swatch, graphic artist! Read me the Lab values so I know what color you’re looking for! Lab numbers are where it’s at, man!

An early issue of the CHROMiX ColorNews featured an excellent analogy about toasters that pointed the reader to Lab as a great independent space for defining color.

Well, a hidden little secret has deviously been kept shrouded from the innocent public, but I’m ready to blow the lid off this conspiracy right now. Lab is warped! It is not quite as perceptually uniform as some would believe. In fact, the human sensation of distances between colors are uneven around the Lab space. It’s somewhat twisted and distorted.

There have been clues about this reality for years. Some might have noticed in the early years of profile generation software that yellows had a tendency to easily shift green, and blues to purple, reds to orange - but latter updates to the software fixed all that.

C’mon - you mean to tell me you never noticed the way the cyan and blue ink ramps would twist a certain way, counter-clockwise, while yellow would twist in a clockwise direction? Sure, ink impurities might be responsible for some of that, but a lot of this is due to warped Lab.

And then, did you notice we had to develop newer, more accurate ways of calculating delta E? According to colorwiki.com: “Delta E is a unit of measure that calculates and quantifies the difference between two colors.” A delta E of 1.00 is considered the smallest distance between colors that a human can distinguish by eye. In this day and age, we rarely choose to use delta E ab (also known as delta E 76) in calculating small differences between colors. Delta E 2000 is much more accurate, and is implemented in most software these days. Calculating a single distance between two colors using Delta E 2000 involves 29 different equations. Delta E ab would use just one. All this just to try to un-warp Lab!

Maybe it’s not that bad 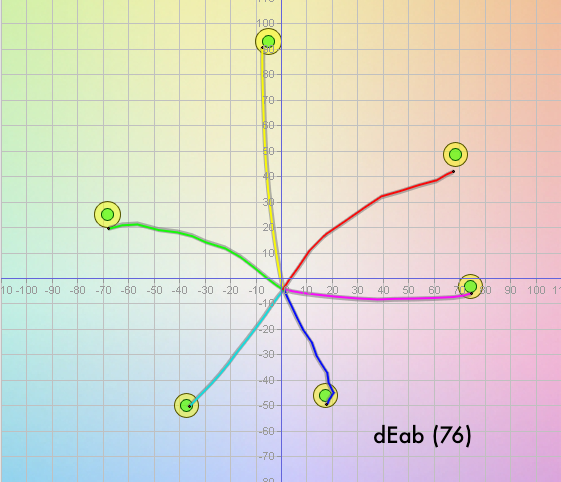 As unfortunate as this irregularity of Lab is, it's what we have, and we've managed to work with it so far. Here’s an analogy that might make it easier to picture the problem and why it is hard to come up with a solution that will “just fix it”.

Imagine laying an even grid of crisscrossed lines onto a map to aid in identifying different locations on the map. Then you find out much later that the map under your grid was slightly wrong, but by then everybody was using that map to find places, it had been copied and distributed world-wide, and it would be very difficult to have everyone start using a corrected map. (cough)Mercator(/cough). Lab space is like the grids you laid on the map. Those grids still serve as a very valid means of communicating where on the map to find Pike Place Market - but, the distance between Pike Place Market and the Space Needle might be farther than it looks since the underlying map is slightly skewed.

This is similar to the situation we have with Lab space. The even distribution of that grid of Lab values is still a very accurate way to identify colors. It’s just that the distance between colors is not as evenly spaced as it appears on the graphs that you see.

This whole issue has come front and center with the adoption of delta E 2000 (dE2000) for G7 calibration verifications. Our own Curve3 software had a 2 dimensional ab grid showing how the ink ramps of a printer would stretch out as more ink was applied. How close they got to the “bullseyes” at the outer edges of the “spider graph” would tell how close the printer came to the specification they were aiming for.

With the adoption of dE2000 in the specification, our Curve4 software shows a similar spider graph, except that now we calculate the aim points and the tolerance variations more correctly - using dE2000. All of a sudden these are not small circles but large ovals (ellipsoids), stretched and misshapen in various directions. They are more like lily-pads than bullseyes and the natural inclination is to think that this new graph is somehow wrong. (Why are they so big?) Actually, these ovals are faithfully representing the variation that is allowable according to the spec using dE2000. 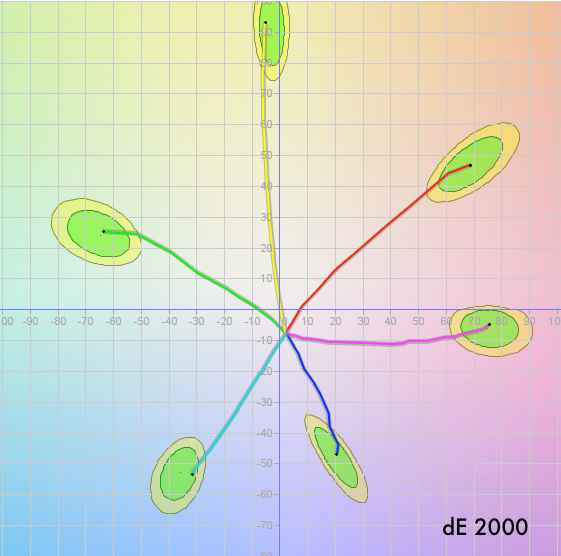 How is it warped?

Taking a look at the shapes of the lily pads in the new spider graph gives you an idea of how Lab is warped. The yellows and blues, for example, are long and narrow as they expand out from the neutral axis. This shows that, for these colors, it takes a greater difference in chroma (saturation) in order to affect a similar difference in hue perception - compared to what you would expect just looking at their relationship in a Lab grid.

There you go. The secret’s out. If this issue of the newsletter becomes popular with our readers, I might come out with a future revelation about how Chris Pratt is really a color management technician in Seattle.

Nah… just joking. One place where you can always depend on getting real news and useful information about color is from the CHROMiX ColorNews.