This reserved article originally appeared in CHROMiX ColorNews Issue 27 on May 22, 2007.

In recent years, most of us have been making the switch from CRT monitors to LCD either by choice or necessity. As our old CRT wore out and we went to replace it, we were surprised to find that some of our favorite CRT's are not being made anymore.

Seemingly overnight these venerable CRT workhorses that were 100 years in the perfecting, are suddenly no longer available. If you have been bemoaning the on-rush of progress and still hoping to locate a hoard of Sony Artisans, then maybe something in this newsletter will make it easier to bend to the inevitable.

A CRT (Cathode Ray Tube) monitor has traditionally had several good things going for it:

On the other hand, an LCD (Liquid Crystal Display) has the following advantages:

Since LCD's are rather new animals for many of us, let's look at how they work:

Fluorescent lights or white LED's (Light-Emitting Diodes) provide the light for the screen. This backlight shines through the LCD material which is a liquid or half-fluid substance that can allow light to pass or not, controlled by an electric field. In front of the LCD layer is a color filter which contains a red, green and blue filter for each pixel in the monitor's display. These layers are all sandwiched by two polarizing filters, and the whole business lies behind the front plate which is the surface of the screen that you see in front of you. 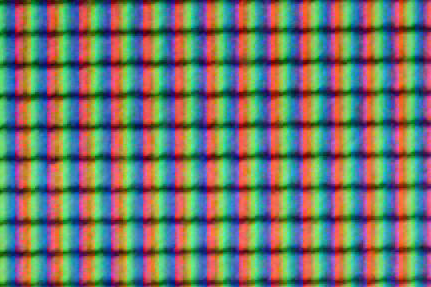 The Liquid Crystal layer determines whether or not (and how much) light will pass through the RGB filters. This is how the color for each pixel is formed. Therefore, from its essence, an LCD monitor is quite different from a CRT, and has a whole different set of advantages and challenges. The backlight is somewhat independent of the color producing function in an LCD. It is possible to put any kind of light behind an LCD panel, and some new photographic printers make use of super-bright LCD panels as exposure engines. The "Europa" printer by Express Imaging, Inc.

Unlike a CRT, where each of the RGB guns can be brightened or dimmed - affecting the brightness and the color, the LCD has a constant source of light that is independent of the coloring function. This explains why some LCD's (like the Apple Cinema Displays) have only a backlight adjustment on them. In a sense, that's the only hardware adjustment you need.

In order to produce "black" on the screen, the LCD elements need to completely block the backlight from shining through. As good as these are at trying to block light, they are not going to be as effective as a screen which actually turns down the light at its source, as a CRT does. For this reason, LCDs will not be able to get as black as CRT's, and we sometimes see "backlight bleed" shining around the edges of a dark screen. On the other hand, LCDs are great at being brighter than CRT's, and the extra brightness can be called into play to provide more shadow detail.

If an LCD can't get as black, how can it show more shadow detail?

Among the many ways our eyes can get tricked is low-light sensitivity. An equal amount of progressively darker shadows does not result in an equal perception of that change in our eyes. In near-dark situations, our eyes have trouble detecting subtle changes in shadow.

Because of this, it helps to have a monitor that can be brighter. A brighter monitor actually expands the range between the whitest white and the darkest dark. This extended range gives LCD monitors plenty of elbow room to represent all the steps along the way, including the shadow areas. (Ironically, this might be why some people find more banding with LCD's. More on banding below.) People will look at a bright, new LCD and say "Wow! I've got richer blacks!" The truth is, the blacks aren't deeper, they're just seeing more apparent contrast because the whites are so much "farther away" from the blacks.

The color image in your computer needs to get to your display in order for you to see it. In order to do that, the signal needs to be transformed in a video card (also called "graphics" card or board) before it is sent to the monitor for display.

When you create a monitor profile using one of the common software packages, you first use the built-in monitor color buttons to get the monitor reasonably close to what you want, then the software runs a series of color patches past the colorimeter hanging on the front of your display. When it is through, the color curves in your video card have been tweaked and adjusted so that your display looks right. At that point, your monitor is "calibrated." But we're not done yet. A further step is taking the calibration state and rolling it into an actual monitor "profile." (Some monitor profiling systems lump the calibration and profile-making tasks into all one step.)

On Mac computers, you can switch from one monitor profile to another and watch the screen change color as it automatically picks up new video curve information from the different profiles. All modern Mac computers do this.

There are some (very few) Windows PC cards that do not support editable calibration curves (or LUTs.) In addition, Windows operating systems need extra help to get these LUTs working. Many monitor profiling software systems have a quiet little extra program just for Windows systems that load the curves back into the video card automatically when the computer is restarted, since Windows systems lose this information when the computer is powered down. You might see something in your startup menu about gamma loader or "initializing display" when you start your Windows computer. There are also third-party applications (like Microsoft's Color Control Applet) that will allow you to switch monitor profiles at will as well as providing other functions like installing, inspecting and renaming them.

Back to our discussion of the video card...

Being an 8-bit system (2x2x2x2x2x2x2x2=256), these calibration curves are limited to 256 levels of input and output value for each channel (RGB). From white to black, you have 256 "places" along the color ramp. This may seem like plenty, until you start to imagine an image with blue sky, and how you expect to see one subtle hue of blue blend easily into another shade of blue, and so on. Imagine further that in order to hit your calibration aims, your video curves had turned blue down throughout the curve. This will further restrict how many steps of color are available, and this reduction in resolution can result in "banding". Banding is happening when a monitor is showing blocks of color with noticeable transitions, where there should be a smooth gradation between colors. It is especially visible when looking at a smooth grayscale pattern. 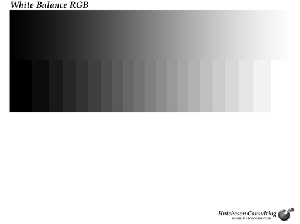 You can make a grayscale gradient (in RGB or Lab) yourself in Photoshop or download this White Balance Target from the Hutchcolor site. Make sure you view it at 100%. (Don't use the ColorWiki example, but get the original by following the link.)

I don't want to overstate this because not everyone has this problem, but some setup situations with LCD's can make banding more likely.

Some of the better monitors have graphic processors built right into the monitors themselves. These LUTs/Curves can have 10-, 12- or 14-bits per color channel. Even a mere 10-bit internal LUT will get you a whopping 1024 points of adjustment. The computer's video card can stay "zeroed-out" at a perfectly flat curve, and the monitor's internal graphics unit can do the high-precision gray scale curves. That way, nothing in the computer's video card is restricting the resolution or reducing brightness.

Next time, we'll look at Part Two of Monitors. There's a lot more to talk about:

Here is a database for display panels