This display is big! The first thing I thought after I plopped it on my desk and turned it on, was "is this thing going to hurt my eyes?" When facing a display like this for the first time, the natural tendency is to want to sit further back from it. You're subconsciously trying to put it into the right perspective in your field of view that you're used to seeing with a smaller display. But then that sort of defeats the purpose of getting a bigger display doesn't it? 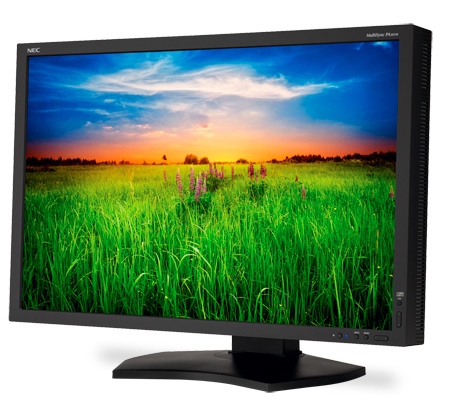 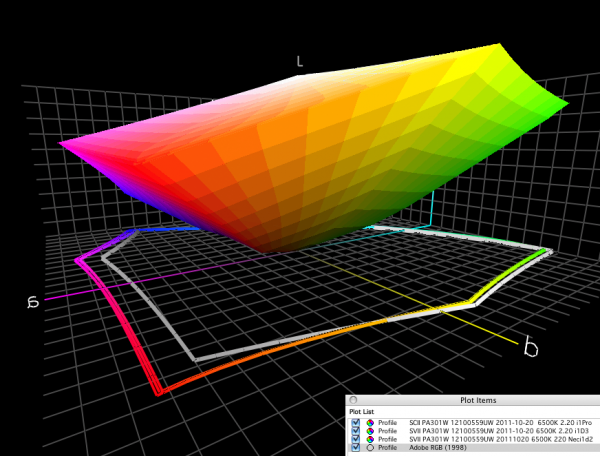 Besides its large physical size, the 301 has a wide gamut, capable of reproducing all the saturated colors of the AdobeRGB working space. The NEC literature claims 98.2% coverage of the AdobeRGB gamut and my rough visual estimate would confirm that. In fact, the 301W has a broader gamut in the Red / Magenta spectrum than AdobeRGB. A rough estimate of the gamut volume of this display is about 1,300,000 cubic Lab values (Using ColorThink Pro.)

The uniformity across the screen was very good. The average dE between various locations on the screen was about .77. The worst uniformity issue I found on my demo unit was between the upper left corner and the lower right corner. There, the very worst single color difference was a very light gray at 2.74 dE (2000). If that's the worst it gets, then it's still really very uniform. Numbers like this means that the display has very even color across the screen. Most differences are less than the human eye can detect and the worst is barely seen by the human eye. The NEC uniformity is corrected for at the factory using a technology they call ColorComp, and Digital Uniformity Correction. What is unknown is the question of how well the uniformity holds up over time. NEC has a four-year warrantee.

Visually the screen looks uniform, except for the last inch of screen space into the four corners and about 1/4 inch around the very edges of the display where the screen degrades to be slightly darker. This issue with the edges is normal for an LCD.

At maximum brightness the display was able to hit 347 cd/m2. I ran it at 60 cd/m2 without seeing any problems with shadow detail, banding, etc.

The official specs from NEC list viewing angles of 178ø, vertical and horizontal. In practice I see a slight reduction in brightness with the up-and-down variation than I do with the side-to-side variation. This is such a large screen that a good viewing angle is essential. When your head is viewing the center of the screen, the corners are so far away that you really need good off-axis viewing angle just to be able to take in the whole screen in a uniform manner.

These numbers are quite good for black level. By comparison, the typical LCD display runs around .30.