- an article by Pat Herold

Among the many interesting projects to come through the offices of CHROMiX in recent years has been the testing, analysis and comparison between different brands and models of digital projectors. We've tested and reviewed over two dozen different models and have learned quite a bit about color on a projector. Now don't go emailing us to give you a recommendation - we are under a non-disclosure agreement for most of this information - but I can give you a few things to look for.

This article will cover the basics of how to get a decent profile of a projector using any of the common display profiling packages. It is possible to get a more accurate profile by using a more advanced system designed for the video world, but that is beyond the scope of this article. 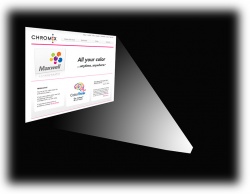 If you are looking to purchase a digital projector, we recommend a model that utilizes the LCD chip technology over the DLP technology. DLP projectors may have a number of advantages (and disadvantages) that have nothing to do with color, but we have found a couple of issues that should put these off your list if you are a color geek:

Several software packages allow you to calibrate a projector. The ColorMunki Photo and Design are relatively affordable and easy to use. The i1Beamer is a module that is available for the i1Pro spectrophotometer. By itself, it would be a rather expensive solution, but if you already have the i1Pro device, it is not much to add the Beamer upgrade. Before the Munki came along, it was about the only way to profile a projector. Some monitor profiling software packages like the Spyder 3 Elite have a procedure for using a colorimeter to measure color off of a projected screen. ColorEyes Display Pro provides a checkbox that allows the measurement window to expand to full screen, making a bigger target to aim your colorimeter to. There's no real procedure for how to do this though - and you're on your own for figuring out how to arrange your instrument to pick up the color off your screen. Still, we've had customers use colorimeters effectively to profile projectors. 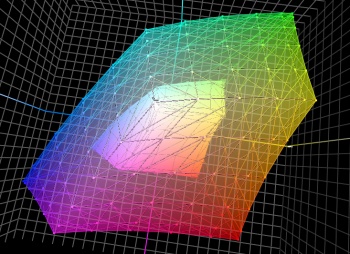 Before profiling, allow the projector to warm up for at least 10 minutes. Ideally you will do your profiling on the same screen as you'll be using for presenting, since the screen color is a part of the overall color of the system. While it's warming up, check to see if your projector has preset "color" modes in the setup menus. Common names for these are "Presentation," "Theater" or "PC".

The "Movie", "Theater", "Cinema" or "Film" mode will give you the maximum color saturation (maximum gamut), while settings like "PC", "Gaming", or "sRGB" will tend to give you less saturation, but oftentimes be brighter. With some technologies, like DLP projectors, this trade-off can be quite extreme: The highest-gamut Movie setting will project a rather dark image, while the 'bright' settings will be washed out - devoid of saturation in the colors. By our calculations, the gamut volume of the projector can drop by as much as 70% depending on these settings. If you are reading CHROMiX ColorNews, and wanting to calibrate a projector, my guess is that color is a big part of your life or work and you will want to use one of these "movie" modes to get a good range of colors on the screen. Use that setting as you profile the projector.

On the right are the gamut volumes for two projectors. The inner gamut is a DLP projector and the much larger outer gamut is a 3 LCD projector. It's such a huge difference that it's a bit hard to believe.

In the profiling software, choose similar parameters you would choose when making a good monitor profile. For example, choose a white point of D65 (or 6500K), gamma of 2.2. The actual white point chosen might not be that important. (More on this later.) Set the brightness aim to maximum.

The Spyder 3 and the i1Pro Beamer has a tabletop stand that adjusts so you can aim the measurement head toward the screen. The ColorMunki will set directly on a table top. You align it so that it is pointed at the screen, and adjust the measurement head up and down so that it is aimed at the center of the screen. If you are using a colorimeter that does not have a stand, you will need a way to hold the colorimeter fairly close to the screen and point the sensor toward the screen so that the sensor can pick up the colors off of the screen. At the same time, you usually don't want a shadow to be in the field of view of the sensor unless the software calls for that. If you are using the i1Pro Beamer, and have a glass bead screen, you might find your aiming circle bouncing around the screen, making it hard to know where to aim. You can solve this by putting the lens slightly out of focus while calibrating.

Run through the rest of the profiling procedure as usual and create the profile. The resulting profile can be put in place in your system as your "monitor" profile when you are outputting to the projector through a computer. Mac computers will assign an individual profile for each display that is connected. Windows systems will usually be limited to only one profile being used at a time - even though you have two or more displays connected. Make sure the projector profile you created is actually the one being used. You can experiment by substituting one of our stunt profiles and see if there's a difference. With Windows, after changing profiles, you will need to restart the computer or run a LUT loader program to actually load the profile information into the graphics card so you can see it. 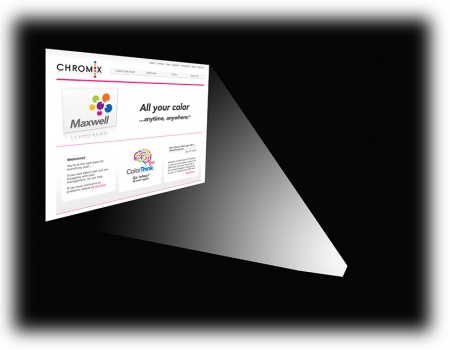 When profiling monitors, we pay close attention to the ambient lighting situation in the room surrounding the display. Ambient lighting illuminating other colors in your field of vision will have an effect on your perception of colors on the monitor. Also, room lighting is critical for people trying to match their display to what they see coming off their printer in the same room. However, with projectors, this is a horse of a different color. If we are making any effort at all to optimize the viewing experience, we are going to turn off all the lights so that the room is as dark as possible. In this case, there is no "ambient" light to speak of - besides that which is produced by the projector itself.

Because of adaptation - our eyes' natural ability to adapt to whatever light source we're looking at - our eyes will do a remarkable job of adjusting to whatever white point the projector is throwing up there. So whatever white you choose will look normal after awhile. At least in comparing colors - "it's all relative" to the white point. However, profiling is still very important; it makes possible the scaling of all the colors to the white and black points.

If you profile your projector on a specific screen using a DVI signal, you can then copy that profile and use it on every laptop or computer that will be used to run that projector and screen. The profile will remain valid and produce identical color on different video cards, even on different operating systems. You need to use a DVI cable (Digital Visual Interface - usually a video cable with white ends) and ports for this rather than an analog cable (blue ends) and ports, since the analog signal is more likely to be colored by signals from the computer's video card.

So how does it look?

Don't forget that if the screen is different than before - that does not necessarily mean it is bad. It might take a while for your eyes to get used to the new look. If you are used to the projector blasting out such high contrast that highlights are blown out and shadows are lost in the murky darkness, then a well-profiled projector might look rather "flat" to your eyes to begin with. Give it some time.